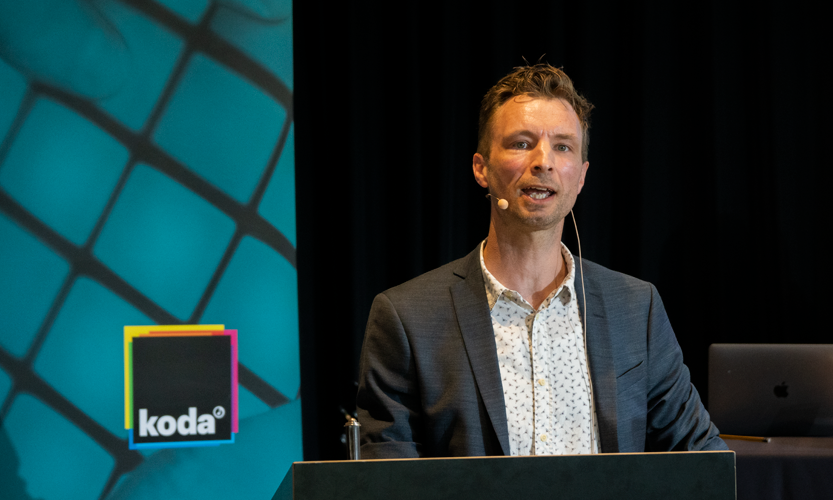 General meeting 2021: Board members re-elected and changes to the Articles of Association approved

At Koda’s general meeting on 16 June, two publisher members of the Koda board of directors were re-elected. At the same time, three out of four changes to the Articles of Association proposed by the board were voted through.
16. August 2021

‘Even though the headline for the day is “Koda's General Meeting 2021”, today is all about the year 2020. 2020 was a year with a lot of challenges for all of us due to the pandemic – not just in our personal lives, but also because large parts of our industry were severely hit. But now we see light ahead. Summer is here, and concerts are slowly re-emerging, so there is every reason to be hopeful’.

With this optimistic message, the chair of Koda’s board of directors, Niels Rønsholdt, opened the general meeting, which, like last year, had been postponed for a few months due to COVID-19 restrictions. The agenda included several important items, such as electing publisher members for Koda's board of directors as well as several proposals for amendments to the Articles of Association.

The first items on the agenda concerned the chair’s report on Koda’s activities in 2020 and the presentation and submission of Koda’s annual financial statement and annual transparency report for approval, as handled by Koda’s CEO. Both were approved by the assembled members.

Two members of the board re-elected

The next item on the agenda was the election of two publisher members for Koda’s board of directors. Three candidates were up for election. After the candidates had each stated their reasons for running, it was time to vote.  After a close election, the two sitting members, Loui Törnqvist and Søren Winding, were both re-elected for Koda’s board of directors. The third candidate, Mette Zähringer, was elected as an alternate.

At the same time, the composers’ associations DPA and DKF have both replaced their chairpersons, who join Koda’s board as replacements for these associations’ former chairs. Accordingly, Koda’s board of directors now comprises the following nine members:

At a board meeting held on 22 June, the board of directors constituted itself as follows:

The board’s proposals were voted through

The next four items concerned the board of directors’ recommendations on issues such as the general policy for deductions in rights income and on the general distribution policy. All recommendations were the same as those adopted last year, and they were all voted through by a significant majority.

The recommendations prompted some discussion concerning the administration and management of Koda’s cultural contributions, an area with which the Board has worked extensively in 2020. As part of the discussion, the Board announced that members will be extensively involved in an upcoming consultation process. The objective is quite simply to get as many funds as possible out into the music scenes to assist the creation of new music. Among other things, this process will involve a number of member meetings where these topics will be debated. More information about these meetings will follow.

Three of the proposals were adopted by more than two-thirds of the votes: the decision not to allow double mandates, which means that the five board members elected by the general meeting may not simultaneously sit on the board of one of the three composers' associations or of Musikforlæggerne, which, according to Koda’s Articles of Association, always have a seat on the board. A change to the frequency of elections was also voted through, meaning that both author and publisher members are elected each year. It was also decided to amend the phrasing of the Danish Articles of Association to use the gender-neutral ‘forperson’ (chair or chairperson) instead of the gendered ‘formand’ (chairman).

The final proposal concerned the possibility of electing an external member to the board. The proposal had previously been rejected, so for this year’s general meeting it had been amended on the basis of some of the criticism voiced in connection with the most recent vote in 2018. 57 per cent voted in favour of the proposal but given that 66.67 per cent of the votes were required, the proposal was not voted through.

An extraordinary general meeting will be held on 24 August, at which the three adopted proposals will be finally voted through.

Latest news
25. January 2023
New partnership to promote a sustainable music scene
The music industry lags behind when it comes to addressing sustainability and contributing to the changes required to curb the climate crisis and the pressure on social sustainability. Now is the time for collective action, which is why a number of enterprises and organisations are launching the ‘Partnership for Sustainable Development in Music’ as well as introducing the ‘Code of Conduct for Equal Access in Music’.
18. January 2023
New strategy to future-proof Koda and help build a stronger music ecosystem
Koda launches a new business strategy covering the next five years. The strategy aims to ensure that Koda adapts to the complex challenges currently facing the industry, while at the same time contributing to build a stronger and more sustainable music scene.