Women music creators are absent from the top of Danish music

Koda's first-ever survey of gender statistics shows an imbalance in the earnings of Danish male and female music creators – one which grows significantly greater the higher their earnings. The imbalance calls for action, says Koda.
21. December 2020

Recent years have seen a growing focus on gender inequality issues in the music industry. To shed light on the challenges in the part of the music industry represented by Koda, the Danish collective rights management organisation is now publishing its first detailed statistics survey of gender equality among composers and songwriters.

Koda’s gender statistics show an imbalance between men and women, both in terms of the overall gender ratio within the field and as regards their relative earnings. Female rightsholders account for only 19 per cent of Koda’s total membership, and their share of distributions received from Koda is even smaller. The plays received by music made by women members were only enough to make ten per cent of the distributions go to them.

The imbalance is most pronounced when looking at members who have their music played to such an extent that they rank among the highest-earning Koda members. Out of the 118 members who received more than DKK 400,000 from Koda in 2019, only nine were women. Women received six per cent of the total distributions made in the highest income bracket.

Need for more information – and for joint efforts

According to the chair of Koda’s board of directors, Niels Rønsholdt, gender inequality is to blame for a great deal of potential being squandered:

‘These figures in no way reflect society at large, and we are missing out on immense potential and a lot of talent, which could benefit the development and competitiveness of the entire Danish music industry’.

of Koda’s total distributions went to women in 2019

Niels Rønsholdt believes that the time has come for a comprehensive and thorough showdown with gender inequality in Danish music, but also points to the need for more information:

‘Koda’s data says nothing about the reasons why things are the way they are, but hopefully they can highlight the need to get those reasons uncovered. If we as an industry are to solve the problem, we must know the root cause. What are the barriers for more even gender representation among the creative parts of the music scene? What makes so few women reach the top of the income scale? Which aspects are cultural, which are structural, and where along the various chains can the real obstacles be found? There can be no doubt that action is required from many sides to put an end to this completely outdated bias. We can all do something, and we must all accept responsibility and act accordingly’.

Women and men receive the same payment per play

When studying Koda’s gender statistics, it is crucial to be aware of the following:

The inequality is worrying – and no surprise

The imbalance becomes even more apparent when focusing on the highest-earning members within the five areas. Out of the ten highest-earning members in the five areas, only three out of the 50 names on the list are women. In addition, the gender statistics show that since the women's share of the total distributions peaked in 2012, it has dropped by 20 per cent to 9.9 per cent in 2019.

Through our ‘Koda Kultur’ scheme, we have already invested in projects that promote female representation in music

For the deputy chair of Koda’s board, Anna Lidell, who has been involved in gender issues in Danish music for a number of years now, the new figures emphasise the seriousness of a well-known problem:

‘The figures revealed in Koda’s gender statistics are worrying, but also unsurprising. We have long known that gender equality was way off within this field, and that is also why gender equality is one of the four strategic focus areas in Koda’s new cultural strategy. Through our ‘Koda Kultur’ scheme, we have already invested in projects that promote female representation in music. We will continue that effort: achieving real change requires a long haul’.

Koda’s gender statistics focus on comparing financial data pertaining to the two genders ‘woman’ and ‘man’ on the basis of Koda’s distribution data from 2019. The statistics provide answers to questions such as: what share of Koda’s distributions have gone to female and male rightsholders, respectively? Is there a difference in the distributions made to women and men in different areas, and is there a difference in how many pieces of music men and women create? 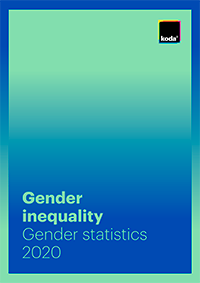