Small signs of greater equality in the music industry

Press photo
Koda’s 2022 report on gender inequality and gender statistics show that gender inequality has lessened among Koda’s new members, and there is much to suggest that the efforts made to promote greater equality in the music industry are making a difference. Even so, redressing the overall gender inequality requires a focus on retaining the new female members who are doing well now, says Koda.
22. September 2022

Certain indications suggest that the growing focus on gender inequality in the music industry has actually made a positive difference. At any rate, there are trends pointing in the direction of greater gender equality among Koda’s new members. This is evident from Koda’s 2022 gender statistics, the third publication of its kind. Among Koda’s new members, the share of female songwriters and composers has gone up by six percentage points to 28 per cent since 2019, and during that same period, their share of the total amounts distributed has gone up by five percentage points to 20 per cent.

Of course, it is nice to see that progress is being made

The increase in the amounts distributed is mainly driven by significant progress in the area of radio, where the women’s share of the total distributions has more than doubled from 16 per cent in 2019 to 34 per cent in 2021. At the same time, radio is now the second largest distribution area among Koda’s new members. On the other hand, things are happening much slower within the area of streaming. Here, the women’s share has only increased from seven to ten per cent since 2019, which has impacts the overall development, as precisely streaming is the largest single distribution area among Koda’s new members.

‘Of course, it is nice to see that there progress is being made. Given the intense focus on the problem, and all the initiatives launched, anything else would have been extremely depressing. On that subject, I would like to highlight the radio area as an inspiration for others in the industry, who want to make a difference and promote greater gender equality. Out of all our areas of distribution, this is where the greatest effort is being made, and it is therefore clear to me that carrying out a strategic and active effort really makes a difference,’ says the chair of Koda’s board of directors, Anna Lidell.

Progress does not extend to all areas

However, a very different picture emerges when looking at the entire group of composers and songwriters who are members of Koda. Here, gender inequality continues to be prominent, and the situation hardly changed at all during the three years in which the statistics have been compiled and reported. This holds true in terms of gender distribution among the members in general and in terms of the share of distributions received.

Key figures from the statistics

The situation is mainly due to the fact that the highest-paying areas for music creators are heavily dominated by men. Within the largest single area, streaming, no less than 91 per cent of the total distributions go to men, and within the third largest area, television, the figure comes to 95 per cent. And while positive trends can be discerned among Koda’s new members, they account for only a small portion of the total distributions, and so the progress made in this regard has little impact on the total gender equality rates among all composers and songwriters.

‘The lack of change in terms of gender inequality among our total membership shows that progress is not being made in all areas. If we are to truly put an end to a pervasive imbalance that almost seems to be set in stone, we need to see long-term and persistent effort from the entire industry. We commissioned a study of the causes of such gender inequality earlier this year, and it showed that women – on several levels and for several different reasons – find it difficult to sustain a career in the music industry. Therefore, among many other measures, it is extremely important to retain the new female members who are doing well now if we are to see real improvements in gender equality in the future,’ says chair of the Koda board, Anna Lidell.

This year’s report is the first to investigate how much a given track earns depending on whether it was created solely by one of the binary genders or across genders. This was done on the basis of all the new music tracks created in 2021. The results show that music tracks from 2021 created across genders have a significantly greater chance of financial success.

If we are to truly put an end to an imbalance that almost seems to be set in stone, we need to see long-term and persistent effort from the entire industry

Koda’s 2022 Gender Inequality/Gender Statistics report is based on data on all living Koda members with a Danish social security number (CPR) and on the Koda distributions made to them in 2021. Thus, not all members are included in the statistics as Koda also represents Faroese members, who have no social security number, as well as heirs of deceived members. Still, the amounts included in these statistics cover 99% of the distributions made to all living composers and songwriters who are members of Koda. 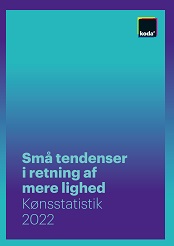