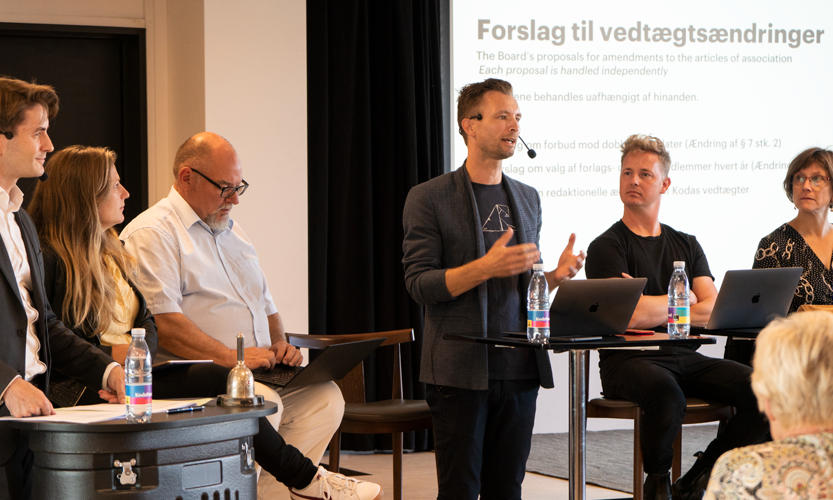 Koda’s board of directors at the extraordinary general meeting

At the Koda Extraordinary General Meeting on 24 August, three proposals for amendments to the Articles of Association were put to the vote for the second time: the decision not to allow double mandates, a change in the frequency of elections, and a specific adjustment to the phrasing of the Articles of Association. All proposals were voted through by a significant majority.
23. September 2021

The amendments to the Articles of Association mean, firstly, that it will no longer be possible to hold a double mandate on Koda’s board of directors. This means that the five board members elected by the general meeting may not simultaneously sit on the board of one of the three composers’ associations or Musikforlæggerne (the Danish Music Publishers Association). Each of the four associations already has a seat on the board, where they are represented by their respective chairs. The change will take effect from the Annual General Meeting 2022, meaning that it will not have an impact on the current members of the Koda board of directors.”

In addition, a change in voting frequency was also voted through, meaning that both authors and publishers are elected anew each year in future. Finally, the extraordinary general meeting also supported a change to the phrasing of the Articles of Association, meaning that in future the articles will use the terms ‘forperson’/’chair’ rather than ‘forman’/’chairman’.

Latest news
21. March 2022
Nordic collective management organisations suspend their payment to Russia
The Nordic collective management organisations (Teosto in Finland, Koda in Denmark, TONO in Norway who are partners in Polaris and STEF in Iceland) are deeply shocked by the Russian Federation’s ongoing war of aggression against the state of Ukraine. Therefore, the organisations have sent a joint letter to the Russian collective management organisation RAO informing them that they will suspend the distribution of royalties to RAO.
13. December 2021
New report: The Danish music industry lost more than three billion kroner in turnover in 2020
The Danish music industry is facing major reconstruction work. The situation is revealed by fresh figures from a number of organisations in the music industry and the Danish Chamber of Commerce. Among other things, the numbers show that the turnover for Denmark’s concert and festival organisers dropped by 52 per cent in 2020. The Danish Chamber of Commerce calls for help for the industry from the national ‘war coffers’.