LICENSING IS ON THE RISE

The Danish experience economy is flourishing, and Koda has upped its focus on licensing agreements for areas such as festivals and music consumption in shops. This has created excellent results for Koda’s general in 2016, generating growth of more than six per cent.

When Koda’s head of general licensing, Camilla Kjær, describes her department’s results for 2016 as “highly satisfactory”, she is certainly not boasting.

In 2016 the general licensing department saw growth of 6.2 per cent compared to the previous year, generating total revenues in excess of 25 million EUR for the first time ever in the history of Koda. This made a very substantial contribution to Koda’s total turnover of 116 million EUR  in 2016.

All revenue categories that fall within the auspices of Koda’s general licensing department showed growth in 2016 compared to 2015: ‘Cinema and film screenings’ (an eight per cent increase), ‘Hotels, restaurants, ships’ (three per cent), ‘Background music’ (six per cent) and ‘Other entertainment’ (three per cent).

The most impressive growth rates of all are found within the category ‘Individual events (concerts, festivals etc.)’, which has seen an increase of eleven per cent compared to 2015 – and jumping by no less than 41 per cent since 2012.

If you are looking for evidence that the Danish experience economy is a real, tangible thing – not just a buzzword – you need look no further than this particular corner of Koda’s activities.

Growth in all areas

“We Danes are eager to go out and have experiences. We go to the cinema, to concerts – for example at the new multifunctional arenas  around the country – and visit festivals. All this serves to increase music consumption throughout the country, and that translates into revenues for the rightsholders Kodarepresents,” states Camilla Kjær, head of licensing.

”Music festivals and open air events are becoming increasingly popular in Denmark, making a positive contribution to our turnover in 2016. This is partly caused by the recent arrival of festivals such as Copenhell, Northside and Tinderbox, and there is nothing to suggest that we have reached saturation point as far as live music is concerned. The year 2016 saw the launch of yet another new festival – Heartland on Funen – and in 2017 we will see the first instalment of the Haven Festival on Refshaleøen. To this we can add two new festivals at Kongens Have in Copenhagen. In 2017 the Copenhagen area will also see the arrival of the Royal Arena, where an impressive number of events will take place,” says Camilla Kjær.

For Koda’s general licensing department, it is all about keeping up with the times and monitoring all developments closely.

“As far as live music is concerned, our strategy is to engage promoters and event-makers behind upcoming festivals and cultural events in an ongoing dialogue at a very early stage. We must spot them well in advance, catching up with them long before they go live so that they get their licenses in order well in time before the actual event,” says Camilla Kjær.

Many entrepreneurs who open their own shops, hotels or restaurants know nothing about Koda in advance. At the same time these markets are facing considerable pressure in some parts of Denmark, but even so Koda has succeeded in creating growth within this area. This has been achieved through focused efforts – and Koda’s consultants are very aware of maintaining an open, direct and down-to-earth dialogue with business owners when they visit them.

“It is hugely important to maintain the right kind of dialogue and communication, showing that we understand our customers and their needs, and I think we’ve succeeded in that strategy. When we meet and talk to our clients we take great care to explain what their money is used for, how it contributes – and most people are quite understanding when they hear this. For example, we inform them that we are a non-profit organisation and that the funds we receive are very carefully distributed to the relevant creators of music, enabling them to make a living from creating music. This promotes a positive atmosphere and willingness to pay,” explains Camilla Kjær, who can also take pleasure in the fact that the growing customer satisfaction is also reflected in survey statistics:

“Last year, the share of ‘highly satisfied’ customers went up to 43 per cent. At the same time our employee satisfaction rates are also very high, and we have very skilled and committed teams. All my co-workers are proud to say that they work for Koda – even to their hairdressers who are about to set up a licensing agreement with us. We enjoy a positive image – in-house and out there in the world,” says Camilla Kjær.

In 2016 many new shops chose to become Koda customers and play Koda’s repertoire. And other shops and chains have returned as Koda customers after having left the fold for a while. The new arrivals in 2016 included prominent chains on the Danish market such as Fakta, Lagkagehuset, Burger King and Intersport. Many shops are opting out of royalty-free music – or muzak, if you want to call it that – and they often do so as a direct result of pressure from staff and customers who quite simply can’t stand that kind of elevator music.

“It is important for shoppers and patrons to be greeted by familiar music that they know and might even hum along with, and we offer access to what is virtually the entire music repertoire of the world. Studies have shown that music creates added value for inter alia shops and restaurants: it promotes a pleasant ambience, and patrons quite simply buy more. We have launched a new study that will investigate whether familiar music is better at stimulating sales than unfamiliar music. We expect to see the results of that study in 2017,” concludes Koda’s head of licensing.

Music festivals and open air events are becoming increasingly popular in Denmark, making a positive contribution to our turnover 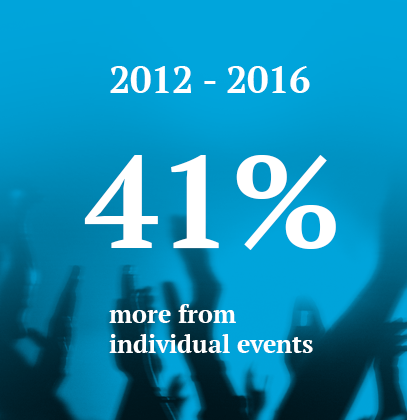